Coffee is, for many people, the very definition of what it is to have a good morning. In the morning, there is nothing that I enjoy doing more than sitting down with a steaming cup of coffee, either black or with foam of milk, and enjoying it.

Coffee is going to be your best buddy whether you are in the mood for something to drink that is 100% organic nectar water or you are in need of something that will instantly wake you up. Since India is one of the best ten coffee producing countries in Asia and therefore is considered by many to be a haven for people who enjoy drinking coffee, you can rest assured that the coffee you buy in India will be of the highest possible quality.

Every year, a multitude of brands manufacture exceptional coffee, and millions of people in India consume it on a daily basis.

In this post, we will discuss the top coffee brands available in India that seem to be suitable for a wide variety of purposes, including those listed below. 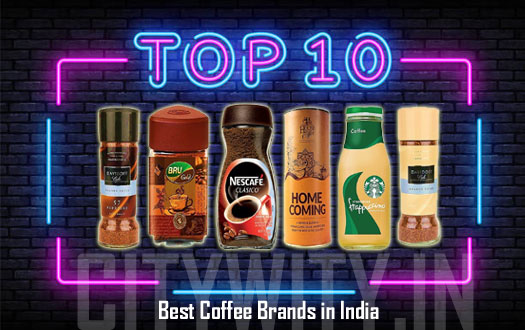 When we talk about coffee, one of the few brands that come to mind is Nescafe. Other brands include Starbucks and Folgers. It is a coffee brand from Switzerland that was established in 1938 and is currently one of the most successful brands owned by its parent corporation, Nestle.

As of July 2020, the worth of the Nescafe brand was estimated to be over $20.4 billion, and the company delivers coffee to practically every part of the world. Within the Nescafe product line, you have a selection of different kinds of coffee from which to choose. With its thoughtfully developed products that are flavorful and made with best-quality ingredients, Rage Coffee is ushering in a new era in the manner in which people in India consume coffee.

This forward-thinking consumer packaged goods company was established in year 2018 by Bharat Sethi but has quickly become a new craze among those who enjoy drinking coffee in India. The company’s headquarters are located in New Delhi, and customers may readily acquire Rage Coffee’s wares from internet retailers. When it comes to Indian coffee, the Bru brand does not require an introduction because it is so well-known. It first opened its doors in 1968, and ever since then, it has been turning out coffee of exceptional quality across the nation. Bru was among the first Indian companies to include chicory in its instant coffee mix. They did this in order to improve the aroma and flavor of their coffee, and received widespread acclaim everywhere it was sold. This coffee’s flavor, which is a patent blend of Arabica and Robusta, is long-lasting that makes you want to drink more of it. Davidoff is the result when Arabian coffee beans are combined with high-end service. Davidoff is recognized as among the most successful and well-known luxury coffee companies in the world, and the company enjoys a sizable following in India.

The Davidoff Group is indeed a Swiss family company that was established in 1980 and trades in timepieces, leather goods, collectibles, and fragrances. The company was named after its founder, Zino Davidoff.

The Davidoff Coffee has become one of my favorites, and it comes in a variety of aromas and tastes. You should absolutely give it a shot because all of the different flavors that have been added complement the coffee and bring out its natural beauty. Blue Tokai is the only Indian company that markets its coffee as having been produced from the farm directly to the consumer’s cup. It was created by a pair from South India who was living in Delhi at the time and missed drinking the traditional filter coffee from their home region.

The company was established in 2012, and its headquarters can be found in the city of Delhi in the Indian subcontinent. Because it offers a plethora of distinct coffee selections and flavors, you won’t ever want to drink another brand of coffee again after trying this one. You won’t be able to get enough of the aroma of freshly roasted Arabica beans. The headquarters of the American international coffee business Starbucks are located in the city of Seattle, in the state of Washington. It is among the largest coffee companies in the world and also has nearly 33,000 outlets located in different countries all over the world.

In the year 2019, the company achieved a staggering $26.50 billion in revenue and now offers produces freshly roasted and delicious coffee grounds that can be simply prepared at home. You can find several great selections

The notable characteristics of the coffee sold at Starbucks are: Continental Coffee was established in 2016 by a group of people who have a passion for producing high-quality coffee and wanted to share their enthusiasm with the rest of the globe. It was established by Mr. Challa Rajendra Prasad & currently has its headquarters in Hyderabad, which is located in the state of Telangana.

The coffee is enhanced in both flavor and aroma by the use of thirty percent chicory, which the company uses. The company is known for producing a wide variety of high-quality coffees that are sold at prices that are quite reasonable and offer excellent value.

The Continental Coffee possesses a number of notable characteristics like: Country Bean has quickly become a household name in India thanks to its extensive selection of delicious, one-of-a-kind coffees, which has contributed to the brand’s meteoric rise.

Everyone who isn’t a fan of normal instant coffee powders will love this product because it has a wonderful flavor that is reminiscent of filter coffee.

If you like regular coffee black or even with milk, this Country Bean has a wide range of options for you to choose from, and you should definitely check them out. Anish Satnaliwala & Aditi Somani Satnaliwala are credited with establishing the brand, which has enjoyed a great deal of success in more recent years.

Key characteristics of this Country Bean brand of coffee are: ata Coffee, a product of Tata Consumer Products, is one of the most well-known brands in the country and is considered a subsidiary of the company. The company has over nineteen coffee estates spread out across South India, and the coffee that they make in India is of the highest possible quality.

It was established in the year 1922, and by the year 2020, it had created a turnover of greater than Rs 7.19 billion. Tata Coffee does have its operations running well all across India and their headquarters are located in Kolkata.

Important characteristics of this Tata coffee are: Coffee company Sleepy Owl was established in 2016 by three close friends named Jai Thandi, Arman, & Ashwajeet Singh. The company is quite unique and fascinating. In 2018, the company was able to get a funding round of $500,000 thanks to the significant amount of traction it has garnered in the Indian market.

It is well-known for producing very flavorful cold brew coffees, which are gradually acquiring a lot of popularity around the nation. The company makes a wide variety of exceptional coffees, and you can pick and choose among them.

This concludes our rundown of the top-rated and highest-quality coffee brands available in India; any of these are suitable for daily use, as well as for use on special occasions or even when you have visitors around. The high-quality coffee produced by these brands is certain to exceed your expectations.

You merely need to select the ideal coffee based on how your palate responds to different flavors. Therefore, the next time you make plans to go food shopping, make sure that you include the highest-quality coffee in your shopping cart.